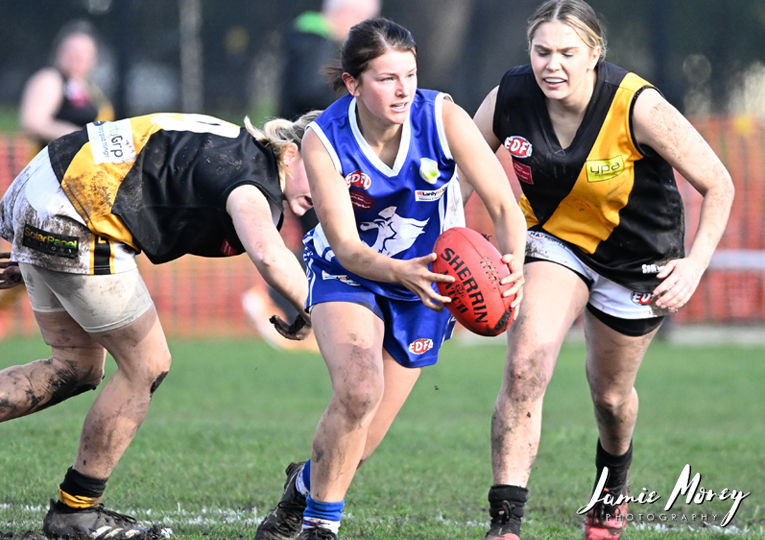 Keilor is the clear favourite in the Airport Toyota Women's Premier Division, having lost just one match for the season, but will be challenged by Oak Park, Westmeadows and Aberfeldie.

The Blues and Kangaroos face each other for a second straight week.

While the Blues have won both matches between the sides, they haven’t had it all their own way.

Two of the three lowest scores for the Blues this season have come against Oak Park.

Last week the Blues did the damage in the first half and led by 27 points at the main break.

Knowing that they were going to face each other in the first week of finals, how much did they put out on the field, who knows?

Both sides have a number of VFLW-listed players, who have stood out, when they’ve pulled on the jumper.

This match though is likely to be decided on the players that sit below them.

These two sides have had very different seasons.

The Tigers were among the early pacesetters before a mid-season slump. They’ve shown some better form in recent weeks, winning three of their last four games.

The Tigers top end talent is up there with the best in the league, with Gemma Wright and Courteney Munn having both been on AFLW lists.

Abers started the season slowly as they came together as a side. They’ve put together some good performances and have truly earned their finals spot.

Ilaria Akers has been the standout for Abers, while the experience of players like Elisha Wain and Kylie Kennedy has been vital.

Having split the two matchups between the sides, both teams will take some confidence in.

Neither side is the highest scoring in the competition, so if one team was to get out to a good lead it would have a big impact on the result.

The top four in Airport Toyota Women's Division One has been set for a number of weeks, with Greenvale, Strathmore, Essendon Doutta Stars and Gisborne clearly the best four sides.

Outside of a poor performance against Essendon Doutta Stars, the top two have had a gap on the next two.

Greenvale shaped as the team to beat in the pre-season and it proved exactly that. The Jets have built every year and with the addition of a bit more class have taken their game to the next level.

Strathmore is another side that have built every year. They’ve got a core group of players that they rely on week in week out, most who are still at the start of their football careers.

The Mores had seven players named in the best at least five times, led by Chiara Guarino. What is impressive for the Mores is their midfielders kick goals too.

The Jets have a bit more spread, but they too rely on their top talent. The likes of Terira Fry, Alisa Magri, Haylea Cooke and Zoe Hardiman bring plenty of flexibility.

Adding Alex Quigley, one of the best goalkickers in the competition in the back half of the season, has been handy too.

The Jets won both games between these two sides, but the second one was decided by just one-point.

The other semi final is between Essendon Doutta Stars and Gisborne.

The Stars were one of the unknown teams heading into the season. Coming down a division and having lost a bit of depth, it was going to be interesting what they did.

They struggled for numbers early, but with the NAB League and VFLW seasons ending, were able to strengthen their side.

Aleesha Hobbs, Neve Crowley and Trinity Skenderis are some of the standouts for the Stars. Larrissa Haifa, who is still able to play under-18.5s is one who has taken that next step.

Gisborne is a side that you know what you are going to get.

The Bulldogs are a well set up side and have a number of players who just do their job each week.

While they don’t necessarily have some of the stars that the other teams have, they are a side that has plenty of finals experience.

Brianna Woodburn, Shannan McFerran, Charlotte Noonan are three that will be key for the side if they’re to make it deep into finals.

After an up and down season in Airport Toyota Women's Division Two with a few forfeits and teams struggling for numbers, getting out and playing finals is exactly what these teams are after.

Tullamarine, Airport West and Coburg Districts will be playing finals for the first time, which throws another element into the mix.

The Demons will go in as favourites against Airport West, having gone through the regular season undefeated.

Jade Reaburn has been a standout for the Demons, while the likes of Tricia and Bianca Devine, and Fallon Courts bring plenty of experience.

The Eagles have a massive spread of contributors this season and the ability to pile on the scoreboard pressure.

The other semi final, has Coburg Districts facing Westmeadows. These two teams have tested each other the last couple of years.

The Tigers have a bit more experience in finals than the Lions do, which could be telling.